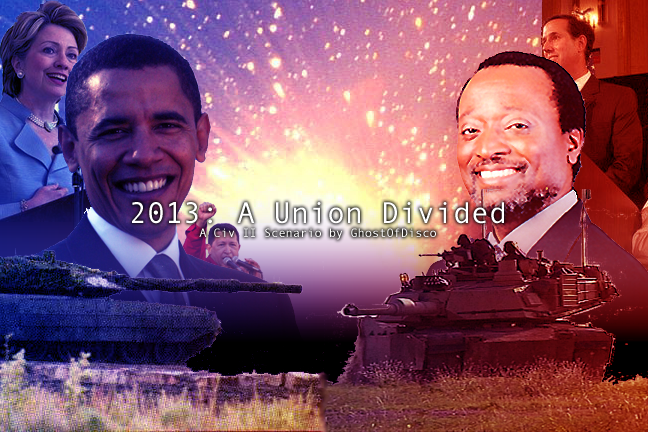 The year is 2013, and the rift between those who would hold to America’s traditionally Judeo-Christian values and those who would disregard those values in pursuit of what they see as “freedom” has grown wider than ever. Nowhere was this more apparent than in the 2012 presidential elections, which Republican candidates Rick Santorum and Alan Keyes won by the narrowest of margins. Fearing what two social and religious Catholics might do in the Oval Office, liberal groups convinced the “blue states” to secede from the Union and form a new nation: The Commonwealth of North America. Now, as Santorum aims to become the next President of the United States, two great armies stare down each other across the North American continent.

The “culture war,” which was once a metaphor, is now literal.

The United States of America (USA/Union): The federal government (initially) under Santorum. As the military by and large remained loyal to their country during the secession (even the National Guards of the seceding states sided with you), you are in command of a large and advanced force at the outset. However, the secession has broken apart the lines of supply for your military-industrial complex, and thus you must reestablish your logistics chain in order to build the more powerful units (such as tanks, (manned) planes and artillery). The lands still under your control or contiguous, but vast - sending units from one front can take a while unless you use your all too few airports: it might be best to focus on one front at a time. Be forewarned, however; New York and Chicago are tough nuts to crack, so it might be a good idea to flank/screen them before trying to take them directly.

The Commonwealth of North America (CNA/Commonwealth): The liberal "secessionist" government. At the outset it is divided into three main areas: the Great Lakes states, the Northeast (from Pennsylvania to Maine) and the West Coast (Washington State, Oregon, California, and Nevada). The Union has significant military forces at the border; however, remember that your job is not to conquer the Union, but to survive. Initially, all your military support comes from foreign governments and mercenaries; however, you can start raising new units at the outset, though (like the Union) you will have to reestablish a military-industrial base if you want to build heavy units of your own. And not all defeats are detrimental; lose the right cities, and your allies might send in reinforcements to retake them...

Canada and Mexico: The two countries bordering the United States (and its offshoot enemy) start with both advantages and disadvantages vis a vis their Yankee counterparts: the can already build their tanks, planes, et cetera from the outset; however they lag behind the US and CNA in terms of population, territory and output. They are neutral in the American conflict at the outset; whether they will stay that way remains to be seen...

( The Neutrals are not playable ) 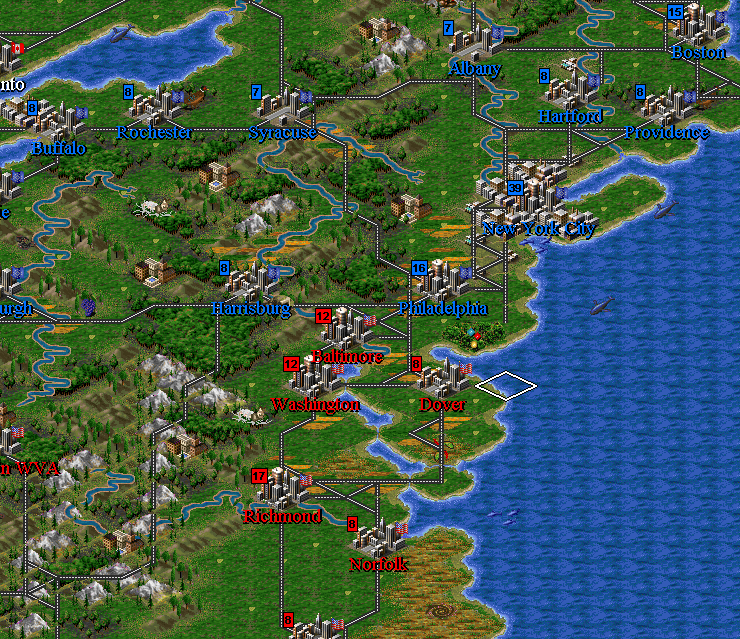 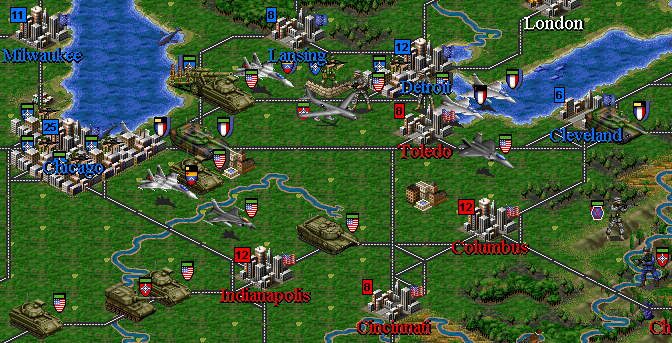 Conflict in the Midwest