"To the soldiers of many races who, in the comradeship of the 14th Army, and to the airmen who flew with them and fought over them, belongs the true victory". ― Field Marshal Viscount William Slim, from his book "Defeat Into Victory - Battling Japan in Burma and India, 1942-1945".

Following their whirlwind victory in Singapore and Malaya, the Japanese began the invasion of Burma in January 1942. The British/Indian and Chinese armies, outfought and out-maneuvered, began a 900 mile retreat to the Indian border. Here, protected by the force of the monsoon, they managed to stabilize the front. Thus began the three and a half year Burma campaign, the only continuous land campaign conducted between the western allies and Japan in the war.

Known as "The Forgotten War", the Burma campaign had many unique features, which the scenario seeks to simulate. Severe climate and rugged terrain affected operations dramatically. The annual monsoon brought military operations to a virtual standstill for 5 months of the year. Lack of road infrastructure meant that air transport and supply was developed to a higher level in Burma than in any other theatre of war. The "Chindits" were specially trained to operate far in the Japanese rear, supported and supplied by air.

Divergent war aims of the allies affected the conduct of operations in Burma. While the British sought to defend India and recapture Burma, the American objective was to keep China in the war against Japan. In order to supply China, the US flew dangerous air transport missions over the Himalayas, known as "The Hump". After defeating a Japanese invasion of India in 1944, the British launched a counter-offensive. A conventional ground offensive spearheaded by armour and motorized troops, supported by amphibious and airborne operations, succeeded in capturing Rangoon just before the start of the 1945 monsoon.

The large majority of the "British" land forces in Burma were actually troops from British colonies. Indian, Gurkha and African soldiers bore the brunt of the campaign. The comprised not just infantry, but much of the armour, paratroops and Chindit forces that took part. Their units went on to form the backbone of armed forces of the independent countries from which they came.

Burma Campaign 1942-1945 is a scenario for Test of Time. You must install the Test of Time Patch Project (ToTPP) version 0.13 or higher to play the scenario. It is a single player scenario for the British only. I hope you enjoy it. 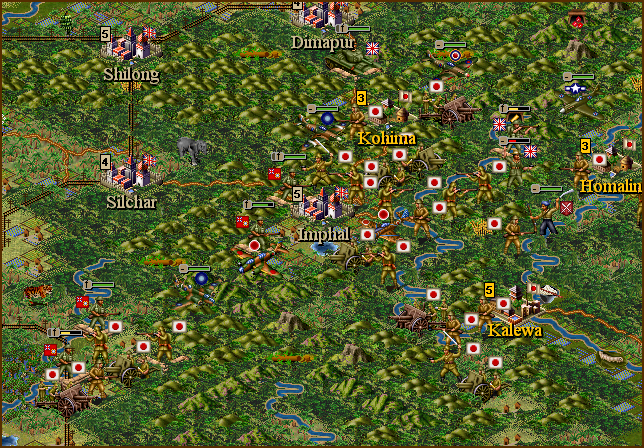