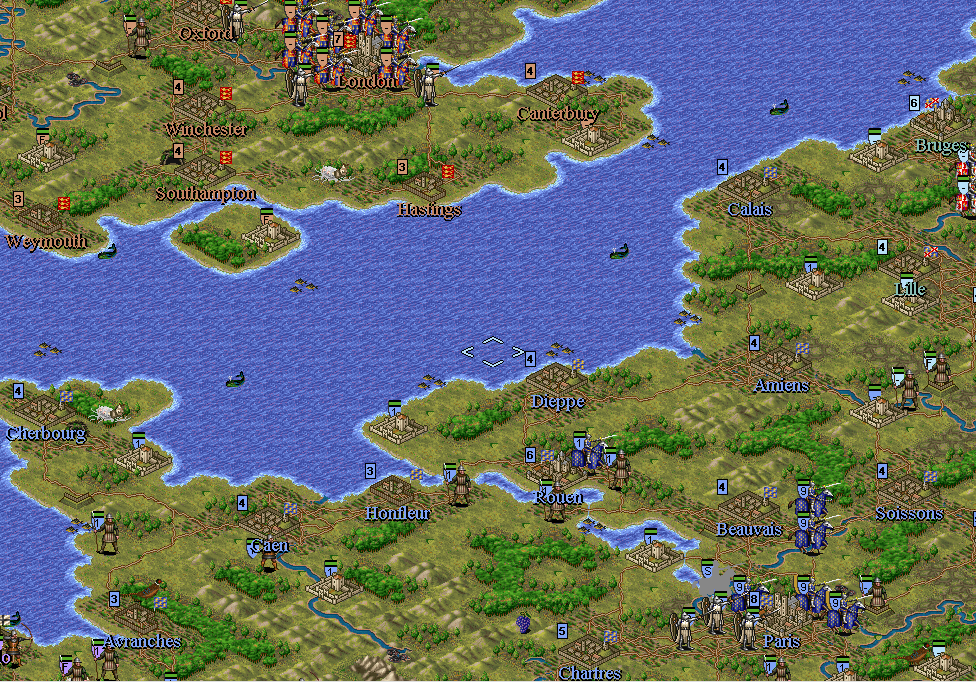 This scenario begins in 1223, more than 100 years before the start of the famous 'Hundred Years War' between the nascent nation states of England and France, which lasted, with intervals of peace, from 1337 to 1453. The year 1223 is significant as the year in which Philip Augustus, King of France, died. During his reign, the boundaries of the French royal 'domaine' expanded dramatically as he seized Normandy, Anjou and a host of other territories - principally from King John of England, the inheritor of the so-called 'Angevin Empire' founded by his father Henry II. In doing so, however, Philip set in motion a chain of events that would lead, ultimately, to the prolonged conflict between his kingdom and England. but it was not only the Kind of England whom Philip alienated by his aggressive expansionist actions; 'France' at this time was made up of a patchwork of semi-independent duchies and counties, ruled by powerful feudal lords who considered themselves 'kings' within their territories and deeply resented the overlordship of the French king. The chief magnates - including the Counts of Flanders and Toulouse and the Duke of Burgundy - made it their business to defy their feudal lord in Paris at every juncture. Meanwhile, in the west, Brittany formed a virtually separate state ruled by a duke with kingly powers, while its people spoke a Celtic language and considered the ruler in the distant capital a foreign potentate. Meanwhile, in Britain, while the Kings of England claimed suzerainty over the whole island - and at times attempted to enforce it - separate kingdoms jealously guarded their independence in the north and west. Scotland, unified as early as the ninth century, had built on its Gaelic heritage with Anglo-Norman style institutions to create a unique, hybrid kingdom which looked half to its southern neighbour and half to its Celtic roots. In Wales, the kings of the northern kingdom of Gwynedd had come, by the thirteenth century, to dominate the other native princes and had even exercised authority over the English interlopers in the south and east of the country. They too were inheritors of ancient traditions extending back to the time when the 'Britons' - as the Welsh called themselves - ruled the whole island. Finally, in Ireland, the pattern of lordship and jurisdiction was even more chaotic than elsewhere. The English king Henry II had invaded the country in 1171, firstly to bring his dissident baron Strongbow to heel and later to enforce his rule over the whole island. But the initial success of the English invasion had, by the 1220s, come to a standstill, leaving more than half the country still in the hands of its Gaelic kings, whose pedigrees and claims stretched into the distant past.