“Iron Curtain” is a scenario based on the Cold War; which took place in the entire world after ww2 till the fall of the Soviet Union.

"It is my duty, however, to place before you certain facts about the present position in Europe. From Stettin in the Baltic to Trieste in the Adriatic an Iron Curtain has descended across the Continent. Behind that line lie all the capitals of the ancient states of Central and Eastern Europe. Warsaw, Berlin, Prague, Vienna, Budapest, Belgrade, Bucharest and Sofia; all these famous cities and the populations around them lie in what I must call the Soviet sphere, and all are subject, in one form or another, not only to Soviet influence but to a very high and in some cases increasing measure of control from Moscow"

In Europe, the Iron Curtain separates NATO and Warsaw Pact; In Asia, The People´s Republic of China acquires the bomb as the fifth country in the nuclear club. Further south, France and the US are struggling to keep their hold over Indochina, as vietnamese guerillas step up the war, for independence, and for communism. All over the world, Democracy and Communism are fighting for spheres of influence and the spreading of their doctrine. People watch with horror and fear, as the Cuban missile crisis pulls the world on the brink of nuclear holocaust. Conflicts arise around the globe, and as religious disputes ignite the second Indian-Pakistani War and fuel the conflict between the Arabs and Israel, the Superpowers rally to outdo each other by a military buildup.

These are the days where nuclear holocaust and World War make people shiver with fear.

These are the days of the Cold War.

This scenario has been designed for PBEM play. I really enjoy playing games against human beings, so this scenario prioritizes that way of playing.

The main obstacle for a SP is the existence of nukes in AI hands. We all know that the AI use them without second thoughts, so that tends to ruin the game.

In order to make a SP version viable, i´ve decided to take the nukes away and make some minor changes. As a result, you have two versions:

B) Single Player version (no nukes) - NOT RELEASED YET

State of the World 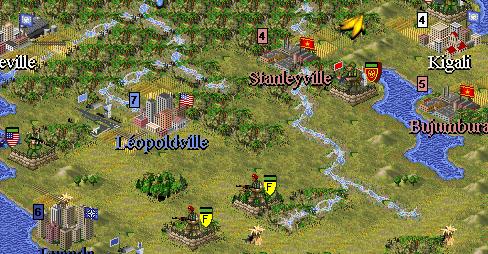 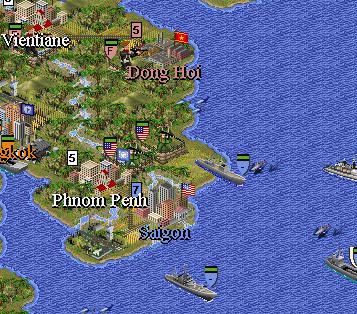 In a few words, the main change from version 1.0 is the replacement of the Arab civ for a Pro-east civ. That new civ works as the rogues or western allies in the NWO scenario. This civ will receive (via events) all the left-wing guerrillas in order to recreate proxy-wars in the third world. On the other hand, i decided not to create a Pro-west civ... why not? because i´m interested in a mixture... A minor communist civ (supported by the big guys) versus the most powerful western civ (USA).

Another important issue is the inclusion of India as the 7th civ. They are in the middle of this mess... hehe. They could change tha balance of power... use that civ wisely.

4. No rehoming of trade units.

7. No "freezing" of airplanes.

9. No building of new cities. Only re-creating razed ones alowed.

10. No airbases in adjecent to each other or a city.

11. No artificial creating of ZOC with units.

14. Only SSBN submarines can carry only MRBMs (just one per sub)

15. Every civ may sneak attack, but only with conventional weapons. Nuclear weapons may first be used on the second war turn.

The idea is to fight "minor wars" in third world countries. Players must establish the zone war and victory conditions. I strongly suggest to post a map with the demarked limits. YOU SHOULD ONLY USE CONVENTIONAL WEAPONS!! No sneak attacks. One turn peace after declaration of war.

Example: 1) War in Congo 2) Participants: Pro-east/USSR vs. USA 3) Cities involved: Leopodville and Stanleyville 4) Victory conditions: Hold both cities for 3 consecutive turns / total surrender of one side 5) Establish a zone of war 6) Special rules: can attack anything inside the war zone; can carry air attacks from carriers/airbases outside the war zone; etc.

The Pro-East civ works as a "multiple civ". In other words, it´s a mixture of a number of nations/cities considered as "left-wing/communist/socialist" for the US/NATO. During the game, you must consider these rogue nations as individual entities. For instance, if Irak invades Turkey, the NATO player must fight ONLY against Irak. he has no right no attack, let´s say, Egypt. The units that attacked Turkey came from Irak, and not from Egypt, Cuba or North Korea.

Another issue is the event created terrorists. For example, some FARC guerrillas appear in Colombia periodically. So, the pro-east player can use them to attack bogota. These units are 100% FARC owned!! Cuba has nothing to do with their actions... the US or NATO player should not invade Cuba because event created FARC guerrillas attacked colombia.

The Pro-east civ must be considered as different nations.

The scenario starts with the Pro-east and USA fighting the Vietnam War. You may ask why Pro-east and not a barbarian civ? The point is that in Multiplayer, the Pro-east and American player can fight a limited war in that area. The objective is to spice things up since turn one and maintain a west vs. soviet conflict that may create future tensions. Moreover, if North Vietnam were in AI hands, the American player would win the war easily.

Since there is an allowed maximum of seven civilizations I had to create not mere countries (china, ussr, nato) but blocs. In those cases, you´ll see many independent, but pro-west or pro-soviet countries engulfed by the “big guys”. These are the most relevant cases:

I realize that some people might have different points of view about this distribution… but well, bare in mind that I had to make some choices in order to prioritize playability over realism. All in all, this is just a game.

You may ask, what the hell is SEATO? Or in the case that the name is remotely familiar to you, then you may ask why the hell SEATO as a civ? This is my answer: I have lots of problems trying lo locate pro-western countries like Australia, Japan or New Zealand. Taking into account that SEATO was like a NATO for South East Asia, I decided to include it. They were pro-west countries, so I thought that it might work out. And during the tests, this civ worked as a minor western world ally… and it work pretty fine!! No complaints… so I gave it green light. However, I recognize that in real life SEATO sucked! It just proved to work fine in the scenario.

Berlin communist. Well… there´s no real explanation for that. We had a discussion about it in civfanatics… this idea won: make Berlin communist, with a Nato airfield right next to it, with maybe one or two squares more being occupied with NATO or USA units. One more time, I had to make a decision… and I chose that.

Here are some web sites I found useful in researching this scenario: