WARNING: YOU NEED FANTASTIC WORLDS TO PLAY THIS SCENARIO!

The idea of this scenario got me a long time ago, I always considered Alexios Komnenos one of the most interesting leaders in history, or perhaps rather history of the Empire during his times. However, making a scenario just about Alexius would in fact mean making another scenario about the first crusade; that's what people would think. To avoid this, I added the times of all Komnenai, Angelai and Laskaris to this scn. In another words, I brought it to the point where Fading Lights start. On the other side, it starts before Alexius was crowned. It is a way make You understand the problems that A. had to deal with better; the scenario starts in year 1071 (Mantzikert battle) and ends in year 1261 (Michael Paleolog liberates Constantinople). As my recent scenario, Paleo, deals with history of Empire from year 1261 up to the complete end of it in year 1461, I can say it's a serie already.

Paleo dealed with a time full of drastic changes, as the fall of Roman-Byzantine Empire or Outremer, and I tried to show it as accuratly as possible. Now, the aim is different. In Paleo, the Empires were dieing; in the times of Comnenos scenario, new powers are borning. There are many things to show; first of all, Seljuks' invasion of Syria that took place a bit earlier, Turks' invasion of Anatoly (it's not the same thing, remember), Byzantine reconquista by Alexius, I crusade that created states of Outremer, rise of Armenia, later Georgia and Bulgaria, Saladin's conquests in Outremer and the third crusade, Mongols, IV crusade and the partage of Empire, Nicean reconquista, and last not least rise of Normans, Genuans and Venetians. I would need at least 12 civs and much much much bigger event files to show it all, but I must resign of something. After a long battle with myself in my mind, I decided to create following civs:

in Balcans and Anatoly, owning also Cilicia, parts of Mesopotamia, Syria, Armenia. It is the only playable civ. Playing other ones is possible, but then, Romans are doomed to fall and all game will have nothing in common with the real history; also, almost all of the events are prepared for Romans.

Including all Moslem civilizations but Turks (those that shall invade Anatoly) and Fatimids in their main posessity - Egypt. Cities of this civ are located in north Africa, Sicily, Cyrenaica, Syria, Mesopotamia, part of Persia... It will be dangerous for You, Romans, mostly because of their fleet.

Fatimid at the time; it includes Egypt and shreds of once theirs Syria. Potential ally, if You want to risk conflict with both Christians and Moslems.

in Venetia, partially Lombardia (I had to make it stronger on the north), Dalmatia, and most of south Italy. Your most dangerous enemy except for the Turks, especially their fleet will be a problem for you.

Representing all trade cities but Venezia (and Zadar); Genova, Piza, Ankona, Raguza, Marseilles with all their posessities, including Corse and Sardinia, plus Hungary (with Transsilvania) Possible ally against Normans-Venezians and Christians.

Possible enemy, possible ally - at least at the start.

•7) Turkish civ, at first having no clear territory.

title.gif (thanks, Jorrit!) shows Ruins of StEumphemia church in Constantinople with Ayasofya as the background... This very nice, symbolical image I have taken -I believe- from internet site of Constantinopolitan patriarchate

Historical accuracy. I didn't check if every single event works, as in FL. Not only because I got to the point that 100% historical accuracy isn't possible, but rather because even without that, my care about h.a. is much bigger then most of civ creators. So forgive me if you'll be too strong or too weak. But history is in statu nascendi in every scenario. It would be unfair to give You NO chance to change it anyway.

And one more general note. All shameless flatterers, newbies that haven't seen any other scenario, all kind beings in all civ2 world, I encourage You to mail&praise me at squonk@poczta.wp.pl

All enraged flamers, old civ2 dinosaurs for whom every scn is worth laugh, all monsters hiding in the darkest corners of Apolyton community, I encourage You to mail and flame at bbrosing@debitel.net, jbalsinde@hotmail.com, Stefan.Haertel@t-online.de etc... 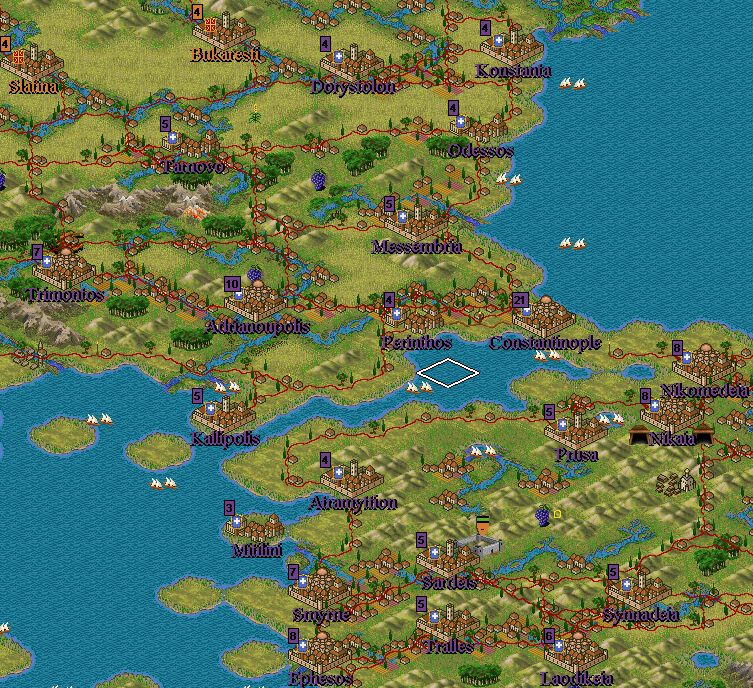 NOTE: Heresson's original graphics are included in the folder surrounded in brackets. If you wish to play the scenario in its original form just put the new files in a folder and delete the brackets from the originals!