In 2110 the United Nations spaceship Columbus 3 at last landed humans on Mars, and colonies modeled on the successful Lunar Habitations soon followed. At first Mars housed only a few researchers and scientists, but the discovery on Mars of cornucopium (the key to cheap cold fusion power) led to a flood of colonists and miners under the authority of the mining giant MegaloCorp.

For more than a century Mars was the most vital element in Earth’s economy, and the population of Mars swelled to the millions. But as the population grew, so did a sense of discontent over the policies of the distant Earth government and the oppressive behavior of MegaloCorp; colonists and miners alike were virtual slaves, dependent on the company literally for the very air they breathed. Strikes and protests were met with violence from MegaloCorp, and the situation worsened.

On July 4, 2289, a loose Alliance of miners, liberal academics, and native-born colonists declared independence from Earth. A Coalition composed of MegaloCorp executives, recent immigrants, and Earth collaborators formed to support the United Nations government, and war erupted on Mars with both sides receiving massive aid from their sympathizers on Earth. The Martian War of Independence raged for more than ten years and nearly rendered Mars lifeless once more; the great polar colonies were destroyed, and only scattered enclaves of the various factions remained.

Then, in 2299, cornucopium was found in deep mines on Earth, and Earthly support for both sides in the war vanished overnight. The United Nations placed Mars under a Quarantine of automated killer satellites and abandoned the planet. Fighting on the surface continued for a few more months, but both sides exhausted the last of their heavy munitions in the Battle of Goddard Canyon in August 2299. Soon after, the exhausted factions retreated to their enclaves and lost contact with one another.

It is now March 1, 2300, and you are the leader of a Martian faction. Can you conquer all of Mars, or break the Quarantine and return in triumph to Earth?

A great civilizaton building scenario (i.e. start from one city), complete with the option of ending with the spaceship race. There are some events, but they mostly add flavour to the scenario, rather than drive the game. By neccessity of its theme, Marian Dawn has entirely new graphics, sound, text, and changes to the basic game effects, but as the author puts it "at heart it is very similar to a normal game of Civ II". 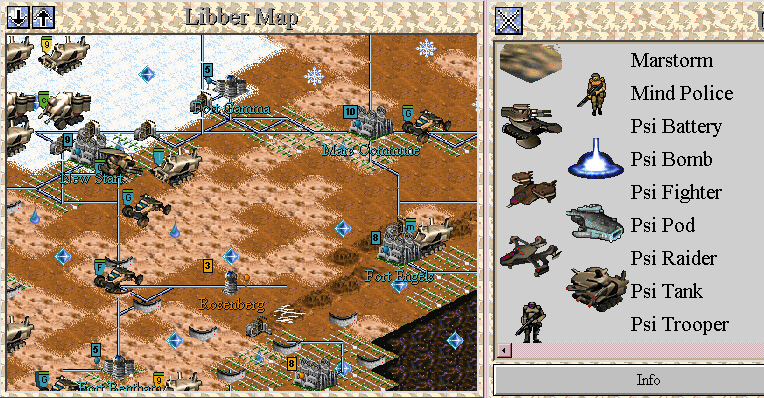 As you can see from this screen capture, the look and feel of the terrain for Mars was very well executed.