Armee Gruppe 'A' is hereby ordered to implement "Operation Seelowe", the invasion of Great Britain. Success is imperative and will end the war. British resistance, whether military or civilian, is to be crushed without pity. The Reich is watching, Field Marshal. Do not fail.

One of the great "what ifs" of the Second World War is whether or not a German invasion of Britain in 1940 might have succeeded. Designed for the German player, this scenario attempts to explore that question. While you build up and organize your army and naval forces, you must use your Luftwaffe units to cripple the RAF and destroy British factories. Then you must make a successful landing in England, break out and conquer all of Britain.

Steadily worsening weather in the English Channel makes this a race against time. Regular forces of the Wehrmacht can be supplemented by parachute and glider troops, amphibious tanks and 'Brandenburger' commando units. The German navy can be strengthened by the accelerated construction of the Bismark and the Graf Zeppelin aircraft carrier. The Germans will face a determined British defense, supported by Canadian, Australian, New Zealand and Free French troops.

Operation Sea Lion is a scenario for Test of Time. You must install the Test of Time Patch Project (ToTPP) version 0.13 or higher to play the scenario. It is a single player scenario for the German player only. I hope you enjoy it. 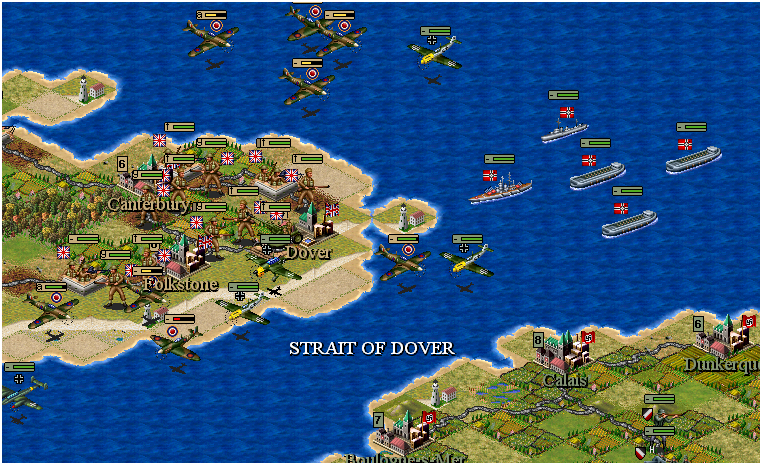