OVERALL: An excellent meshing of the popular Stark Trek world and civilization.

LENGTH: This scenario runs a little longer 'turn wise' then in a normal scenario. There are 650 turns, although you will probably finish (or be finished!) by about turn 400-450.

MAP: The map is large but most of it is space (that is ocean). The map gifs are from the Micropose scenario ‘Masters of Orion’, with a difference: The planets are actually islands and space is ocean. There are asteroids and stars that act as resources for your planets (cities). Unexplored areas of space are covered by tiles that say star trek, and it gives a pleasant and easy to view screen to play on.

TRIBES: You can choose any of the three major races (Federation, Klingon, Romulan). Each plays slightly differently. In Version 2.0 there is a detailed events file that puts the game into several chapters, although these have small effect on play, they do provide for special units for the three races if they meet the objective that is spelled out.

FW vs. MGE: There is one problem from a playabilty standpoint. Neither the spies or the diplomatic interface work properly with the multiplayer gold edition, but the author says they do work with Fantastic Worlds. Specifically with MGE you cannot establish embassies, bribe cities (though you can units), or initiate trades for technology, enforce treaties, or ask for tribute. This does not severely affect play, just makes it different. You can have peace, and the AI will speak to you if your ground units are adjacent to its cities and units. 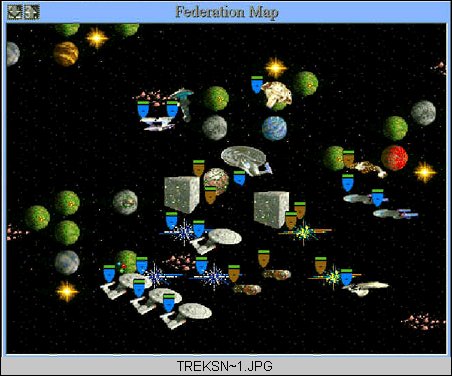 COMMENT: Overall the map and units work extremely well together. Although the map is large, it is well laid out, with plenty of systems (islands) for expansion for each race. The documentation is quite good, with star trek terms used throughout. The tech tree is in logical projection, each advance has some benefit.

COMMENCEMENT: Each player starts with one planet (city), and can build engineers from the start. Each race start area can support 3-5 planets (cities) before space travel becomes necessary.

TECHNOLOGY: Each race has ship technology specific to its race at start, but after the advance universal translator, you can research the other races' ship technology. You cannot, however, research any Borg technology, or even steal it (The rules file will DESTROY your race if you try). The civilopedia includes all types of units except ion storms. There are 21-30 city names for each main race but you probably won't need to build them all. You can build each ship listed in the ‘pedia except the Borg type ships, and each has it uses, but to have a real chance at winning, you must research better types and tri-cobalt devices (Cruise missiles with short range of 2 squares). 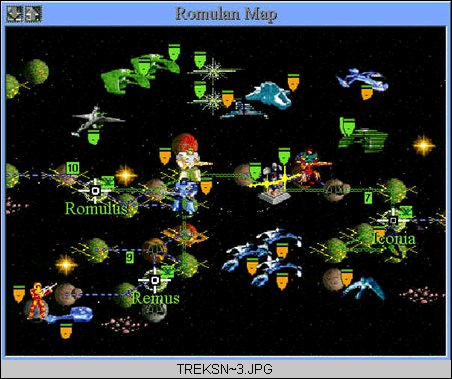 COMMENTS: This is where this scenario really shines.

Kobayashi did all the ship types himself, and many look like stills from the screen. Cloaked ships are provided for both Klingon and Romulan types, these being submarines (no planet attacks, but carry missiles). Each fleet has five major classes with one unique transport and scout. Star Trek Federation fans can build Constitution, Excelsior, Ambassador, Galaxy, and Sovereign class ships as well as Oberth class science vessels (no light cruisers like Voyager though). The Defiant from Deep Space 9 shows up as a special event. The Klingons and Romulans also have a full range of classes.

All the Wonders have been renamed with new artwork to fit the Star Trek parameters.

The events file is set up to trigger events both with turn numbers and by player action. An example: The first time a Borg cube is destroyed, you get an event that changes terrain on the map and reinforces them! There is also an extra events file to make the game tougher, by allowing the Borg to assimilate (take over) defeated enemy units! That one is really tough to win.