The Eurasian Wars represents the natural evolution from the old ‘Dictator’ series of mods. Featuring multiple rules/events sets, 24-bit graphics, cunning unit stats, fiendish AI attacks and much more. The Eurasian Wars takes you back through time into a world of addictive WW2 battles where you can re-create or re-write history. The scenario starts in January 1941. One of the great warring powers of WW2 will be at your command. The mission for your nation or empire is to not only survive till December 1945, but also defeat your ideological enemies and be the dominating power in the world. This will be easier for some nations and harder for others. To help you in your task, you have total command over the military, scientific and econonmic destiny of your people. You can plough tax money into new weapons, or rush buy financial institutions or military installations. You can try to outdo the famous leaders and generals of WW2 by capturing even more land and resources. Perhaps more interestingly, you can seek to experience how WW2 might have turned out had different choices been made and other strategies been used. How would Russia have fared if they have been more prepared for Barbarossa? If Hitler had allowed his generals more freedom of movement, what might have happened? Now, you can decide!

Play as one of the following nations in The Eurasian Wars: 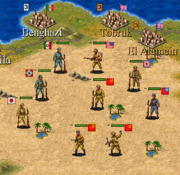 - Make sure you have Timbatron’s ToT CPU patch!

- Back up all important files in your CIV2-ToT folder!

Unzip the files within this archive into the new folder...

In your 'Eurasian Wars' folder, make a new 'Sound' folder.

Then copy into it the contents of these following zips...

Unzip the readme into your 'Eurasian Wars' folder:

IMPORTANT! Read the file for details on batch file setup!