Add more enjoyment to your scenario by taking care of details and using the events mechanism effectively.

With this design tip I will try to show you that a good events file needs more than a couple of text popups, 'change money', or 'give technology' commands. Random events - units appearing sometimes, or other small events can really add to the flavor of a scenario.

What things you want to include in your events file depends on what scenario you want to make. If you want to make a historically accurate scenario, you should be very careful. If you're making a fictional scenario, then you can do whatever your heart desires.

When you make a scenario about, lets say, the Persian Wars, you should base your events on what really happened. If the Persians would conquer Athens, you should not only make a text box popping up, saying: "The Persians conquer Athens! Civilians flee to the surrounding islands! Great riches are being plundered" and then give the Persians a bit of money. That wouldn't be accurate. Instead, make it look like this:

The rest is more or less up to you. What really gives flavor is several textboxes popping up. For example, you have the above text, but aren't satisfied. Make the above events command again, but change the text. It would then look like this:

And so on. Don't make just one trireme, but a lot of them. Six would be good.

This is, of course, only an example if a city is taken. This doesn't have much to do with random events, but it introduces you a little into it.

You have a scenario taking place in the Arabian Desert. You have some units randomly popping up in a city or a fortress, but this doesn't make you happy. The best way to solve this problem is putting a couple of Camel Herds into the desert. You can choose whether they can move or they're just sitting there. If they're just sitting there, then put them near an oasis. Of course, this unit is Barbarian. When the Arabs kill one of these herd units, they get a camel riders unit. What stats they use is very much up to you. Make sure that the units pop up at a certain location. It is, of course, good if there's a city near there.

You have 10 possibilities where to place them - choose wisely. If you have a camel herd near an oasis, and then place it 100 miles away on a dune, that's not very good. Try not to spread them out too much, or else this will just end in a mess (a mistake I did in "Artaxerxes"). The same goes for horses or whatever you want to do. But don't place a camel somewhere in a jungle or a lion in the middle of a tundra zone! Keep these animal units in their natural environment and somewhat in the geographic territory where they live (have you ever seen a dromedary in the Namibian desert?).

If you want to create some animal and/or human units to make life harder for a specific civ, you should still be careful. Don't place 10 units around a city unless that's historically accurate. The history ends with the first move you make, not before and not after. If you recommend selecting the British in a scenario about the Armada, it is really poor planning if the player loses a couple of cities to the Spanish before they even have the chance to move. Of course, if you are making a scenario about a fictional event in a historic frame, it doesn't really matter.

In scenarios that have some nomadic tribes in it (such as ones about the Mongols or early Arabs), it is of course not very accurate if you throw in some large, well-defended cities representing these tribes. A city with the size of 8, named "TATARS" or whatever, that has five Mongol Archers in it, City Walls and all improvements, and this scenario takes place before Genghis Khan is even born, not only drops the enjoyment of the scenario, it compromises the historical accuracy in this area, no matter what else you do.

Instead, it adds much to the flavor and accuracy of the scenario if you include some nomadic camps. These camps don't move. If you want them to be a 'thorn in the side' of the player, give them a high defense rate. Place them at an important road between two cities, or whatever. This way, the Tartars are much more annoying than they are if they were only some units stacked in a large city.

If you'd go for the city possibility, it was not much more than a large city in the middle of nowhere. This way, however, you have several camps that might even prevent you from using several terrain squares.

Another way to include camps is simply making them merchant or travelers' camps in the wilderness, made to be plundered. Another way is to give them to a civilization - the civ will have a no-good camp somewhere (don't give it a home city!) and will loose money once one of these camps is destroyed.

If you have a map of the Mediterranean, and you already have five large cities in Palestine, and want more, you'll have to ask yourself: What cities are really important? Should I include Acco or Haifa? Holon or Tel Aviv? Hebron or Bethlehem? Akaba or Elath? Whatever city you choose, you should include the other one as well - especially if Both Acco and Haifa are important, but you chose Haifa because it's larger. A special unit called "Village" or something similar should represent Acco. These are just like camps, only that they represent true settlements. If a village is killed, you have several choices of what to do (these basically count for camps too). If you have only one village unit in the game (in this case, I'll take Acco as an example), here's one possibility of what you could do: 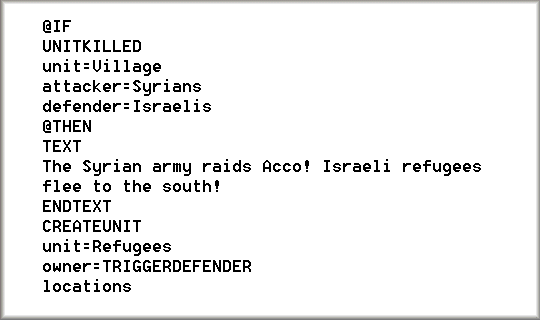 Here we come to a critical event: Revolts. In a scenario covering a certain time span, like a century or an Egyptian dynasty or whatever, revolts should happen once in a while. If the scenario is very long, like 300 turns or so, these revolts increase the what I call long-time motivation of the player. If you're sitting around 150 turns, just waiting for the rival civilization to cross the large ocean to attack your landlocked civ, you will lose the fun of the game. If you will always have to fight uprisings in your country, that will make 150 turns fly like 2, especially if they are serious threats.

With the 'randomturn' command in the events language, you can only make one unit pop up at once. This sometimes really annoys me. Major uprisings can be done only in certain turns, and you'll have to do everything about 5 times if you want to challenge the player. This eats much of the events space, so you'll have to think about including multiple events files. This is highly recommended in long scenarios.

However, if you make the event look like this:

Then, you'll have a unit pop up every turn.

Most of the 'Conflicts in Civilizations'TM scenarios use the Events language only to include some spartan historic messages like;

This gives a little entertainment in the scenario, but the events shouldn't totally consist of such small message boxes. You should note some of the important events during the time the scenario takes place, especially in the theoretical area. If your messages have something to do with politics, be careful. If you say for example;

... in turn 11, but Athens was already conquered by the Spartans five turns ago, this message would make little sense. But if you have a message;

then you could make it like this (historically accurately): 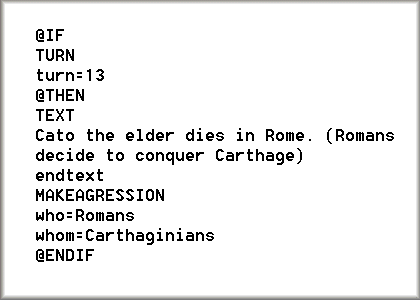 The best text messages you could include are really simple one-liners referring solely to the event, like;

This text does not say where he died, so he could have died either in Athens or in Rome.

Simple random events, doing nothing more than displaying small text messages like above, or playing a sound clip. You can also give some civs special units to represent mercenaries, like for example: 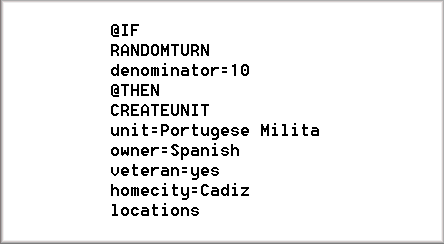 These backup forces will be a welcomed help in critical situations, and can also be good to save some money.

You can also make some dramatic happenings, especially when a city falls or a unit is killed. Example: 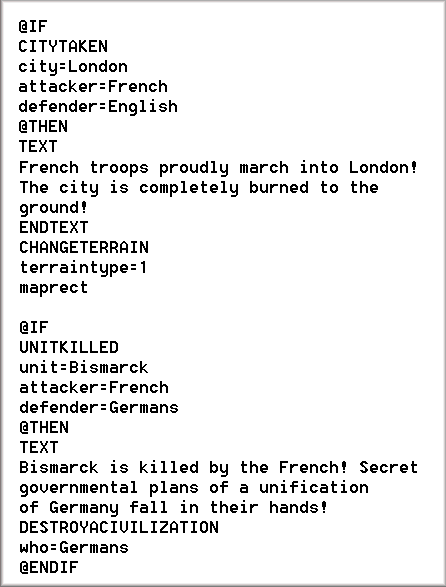 There is a lot more you can do, but all this I described here will hopefully help you in making your scenario more fun to play. Remember, what events you really want to include is totally up to you, these are only suggestions!