Change the colors of the shields, city name text, and other civilization-specific colors as well as how to create special flags for your civilizations.

This drove me nuts for a bit because the programmer did not follow the same interface rules that he used with the unit "shield" and the population boxes right here in the "cities.gif" file alongside the flags. There are several things you must know to successfully control these changes. Some of this is in the "allflags.gif" file, which I recommend, but what is there wasn't enough to keep me from banging my head on the wall for a while. The flags and controls for tribe colors are stored in the "cities.gif" file (at the bottom right), which I also tend to forget when working.

To change the color of a tribe's unit's "shields" you have to put the color you want in the pixel position 4 from the left and 5 from the top in the upper flag box for that tribe, as demonstrated in the allflags file. If your flag is a solid color this is easy, of course. If it's not, one pixel of a different color, even a radically contrasting one, will rarely be noticeable. To actually affect the change, zoom in until you can see each pixel as a complete square box. This makes it easier to count and to control placement. 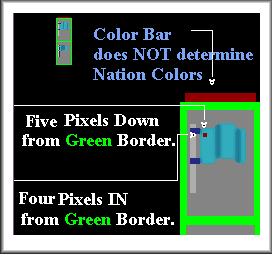 The flags boxes are in the order the tribes appear in the "rules.txt" file, except the barbarians are located in the first box, and the last box appears to be unused. Thus if the Spanish are in position "0" (first) in the rules.txt file table (most things in that file start with ordinal "0" and count up from there rather than "1"), their flag should go into the second box from the left in the flags boxes.

Flags won't show at all unless there is at least one unit in a city. This had me going in circles for a while. Make sure there's a unit in the city you're looking at while you're working!

Unlike shield positioning, or population box which both are top-left positioning, the flags are positioned by the bottom of the staff and the left side of the staff (I believe this equals the bottom left of the whole flag box, but I haven't tested precisely as I'm usually adjusting visually from how it looks in game). The position is controlled by dots of different colors in the border of the cities' boxes (much like the shield positioning dots on the units boxes). One set of colors controls the population size box, the other controls the "flag" box. The colors should be grabbed with an eyedropper tool or the like to insure you have the exact color. I generally have the border color set to my background color, then pull the dot color into the foreground, paint over the old one with a background color pixel, then place the foreground color pixel where the dot needs to go. Start with the dots below the centerline and close (not closer than 2 pixels though) to the left edge so you can see them, then adjust from there. If you put the dot high enough that the flag is partly out of the box the flag disappears entirely.

The "flags" don't have to be flags. "Colonization" is a great example of the creative use of this. I've "borrowed" the Amerind standards myself as they are very nice work. Anything you like, or you find appropriate as symbol for your civilization's cities, can be used as long as it fits in the box. Actual nation flags look great (if impressionistic), and remember flags differ in different periods, and often in the same period!