Altering governments, including how to make a government available to only particular civilizations without breaking the technology tree.

The decision whether to allow government switching in mid-game during a scenario is a meaningful one to address, and will almost certainly have an important effect on the likely success of tribes to achieve the scenario objective.

By allowing a selection of government forms, the player is offered an additional strategic tool in determining their own fate in the game, and this 'extra dimension' usually makes the game more intriguing.

Care must be taken when handling the advanced forms of government in scenario design (with particular recognition of the impact of Fundamentalism and Democracy on game balance). Generally, play-testing will indicate whether these are appropriate to include, too advantageous, or too unmanageable.

Due to their particular set-up, some scenarios are better off without government switching, but in most instances this is not the case, and limiting the player to a single government type for no apparent reason reduces the tactical options and curbs the likely attraction of the scenario.

One simple way of modifying your scenario to more fitting government names may be done by amending the rules.txt file that has been copied into your scenario folder. In order to change the name and / or titles of the government type, one way is to simply replace with your own name in the "governments" section. In this case, changes have been made to Monarchy;

The results of this change are apparent when implementing a new government rule; 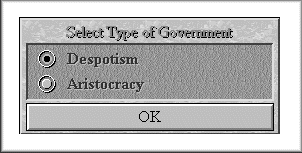 It is important to remember to provide the player with clear explanation on what the effects of these newly named forms of rule are. The player should be able to determine through mechanisms such as; consulting the 'pedia (include the file pedia.txt in your scenario package), the 'read me' file, or through a text-box event.

Providing new names for government types should be done principally to reinforce the theme of the scenario. You may consider it inappropriate to have "Communism" as a government in a Medieval Scenario, however "Agrarianism" could be a more fitting term.

You can additionally modify the title of a leader when taking into account customised government names. Indeed the default game already has plenty of examples, such as;

...where the Viking leader under Despotism rule (govt. type #1) is referred to as "Warlord", while the Spanish ruler under Fundamentalism (govt. type #4) is "Archbishop" (in each case, regardless of gender).

There are various techniques of providing select government forms to certain tribes only. The reasons to take this selective approach may be varied also, and should be in keeping with the scenario's particular milieu.

An important factor to bear in mind is that any technology with the prerequisites "no, no" can not be traded, stolen, or researched. On the other hand, civilization advances with these technologies as prerequisites will become unavailable and will require new prerequisites (unless embarking on the advanced level development of new technology trees).

In setting up the scenario, the author has the option of selecting any government form for any tribe through the 'Cheat > Force Government' mechanism, even if that government form is not possessed as a civilization advance. Should the player initiate a revolution (or Democracy impel a revolution), the only government forms available will be Despotism and those already acquired provided the "Government switching forbidden" toggle is off.

Therefore, the author can make certain government forms available to each tribe at the game's commencement. The A.I. may quickly switch to another form (including Despotism) while the player may initiate a move out of the existing form if that is considered desirable.

Another way the author may set up the scenario is by giving the government technologies from the outset. In order to quarantine these government forms from other tribes, they should have "no, no" as prerequisites. Even though a government type is designated "no, no", any tribe that is provided with this advance in the set-up of the game may still convert to that government form.

If it is more appropriate for a tribe to research towards or indeed be granted a 'quarantined' government form in mid-game rather than be given it at the start, the 'events.txt' file can provide a "no, no" government form advance through the "give technology" mechanism. There are several triggers that may set off this event, such as a turn number or a 'unit killed'.

To illustrate with an example; if the Communism form of government were to be accessible only by the East Germans, then the following set up may be one possibility. By using the 'User Defined Tech A slot' (number ninety-one) to become "Socialism" and adjusting the prerequisites for "Communism", "Socialism" takes the place of "Communism" on the technology tree;

this is supported with the event; 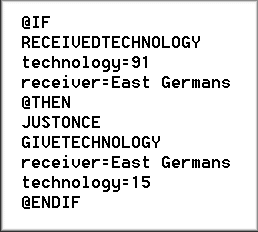 With this particular example pertaining to "Communism" other modifications, such as; amending Espionage, the United Nations, Marco Polo's Embassy's obsolescence, and being aware that Coliseums are affected, would also need to be borne in mind.

These are some of the more straightforward ways of customising governments. By amending government names and/or leader titles, you may strengthen your scenario by bringing another aspect into play that supports the theme. By quarantining governments, you may provide some tribes with particular opportunities or characteristics that give them a point of difference from their rivals. By permitting the player to select from multiple government types, they can have an increased sense of control and apply their own strategic approach to the scenario. Some scenarios benefit from, if not require that tribes are locked into a single government rule, however most scenarios don't.

Three aspects to be particularly aware of;