The force of events move very quickly upon the election of Abraham Lincoln to the presidency of the United States back in November 1860. South Carolina, which did not cast a single vote for him, acts first, calling for a convention to SECEDE from the Union. State by state, conventions are held, and the CONFEDERACY is formed. Within three months of his election, South Carolina, Mississippi, Florida, Alabama, Georgia, Louisiana and Texas secede from the Union.

As president and Commander-in-chief the burden rests upon your shoulders to preserve the Union. Will you be able to successfully marshall the large resource at your command and break the southern rebellion. Can you restore the Union or will the South's fight for independence succeed?. 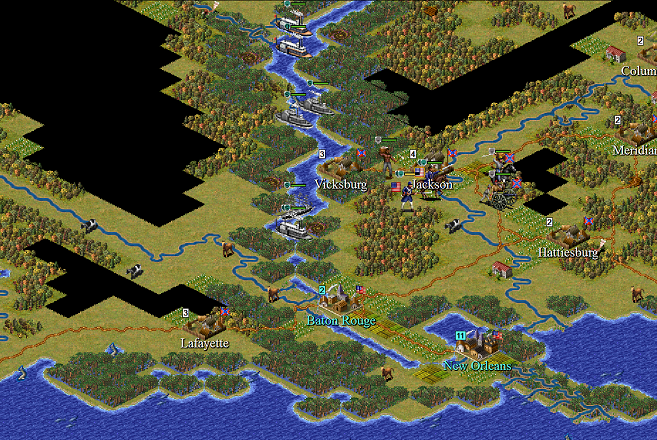 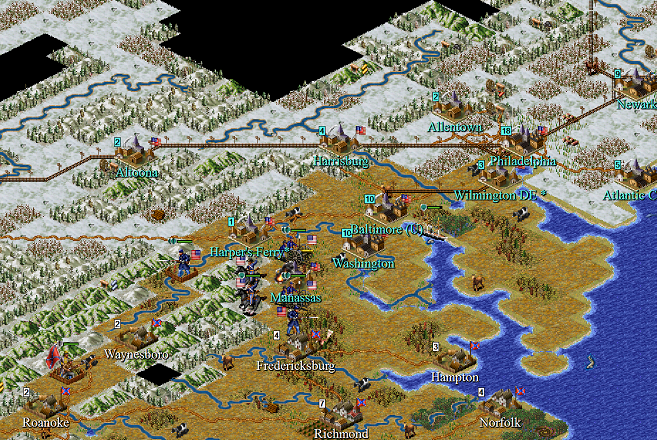 The goal for the Union player is prevent a Southern victory by reducing the number of objective cities the Confederacy holds to 2 or less, thereby gaining a 'Decisive' Union victory.

There are seven house rules in this scenario that I strongly recommend humans players adhere to:

Firstly, it is forbidden for the Union player to build any type of unit in conquered Confederate or Border State cities.

Secondly, the Union player may only build riverine craft in the cities along the Mississippi, Missouri and Ohio rivers.

Thirdly, it is forbidden to build new cities in the game.

Fifthly, do not use 'Obsv. Balloon' units to help your ground units bypass enemy zones of control.

NEW RULE: Sixthly, it is forbidden to move Lincoln from Washington.

Please read the scenario's new v1.1 Readme file as it has been updated and contains new valuable information on the house rules and game concepts

I would like to extend a special note of gratitude to Techumseh for designing a more natural and realistic looking set of summer/winter terrain graphics for v1.1 of the scenario.

IMPORTANT - This game is designed to be played as the Union ONLY. Do not even attempt to play as the Confederates!

IMPORTANT - You must run the “AHD1861.bat” batch file, and select option #1 before you begin the game!