American Civil War is two player game, and not for solitaire play. Play as a hot seat game. One player is the Union, the other is the Confederates. Please see the Readme file before starting.

As in history, the Union must conquer or lose. The object is to preserve the union, which can only be done by forcing the surrender of the Confederacy. The Union has a Republic government, so it has more money and faster research (offset somewhat by the CSA control of the SETI wonder). It also has better production, but is hampered by poor leadership until midway through the game. The CSA has better leadership initially, and better infantry units. Being a Monarchy, it depends on event-created gold to balance it's budget, which will progressively decline as the USA captures southern ports and the cities on the Mississippi River.

Obtaining British recognition was a key part of CSA strategy. This can be achieved by capturing certain US cities; ie. Washington, Baltimore, Philidelphia, New York, Boston, Pittsburg, Cincinnati, Chicago and St. Louis. There is a random chance for each turn that each city is held by the CSA. Some cities are more likely to produce British recognition than others, eg. New York. Recognition provides money, guns and ships to the CSA, depending on how many ports they still control.

The 1864 Election (turn 48) was do-or-die for the US war effort. Had the Union suffered a major defeat at the time of the election, there's no doubt the Democrats would have defeated Lincoln and the Republicans. Peace with the south, and inevitabily, recognition of Confederate independence would have followed. If any of the same cities are in Confederate hands on turn 48, the game is over, and the CSA has won. 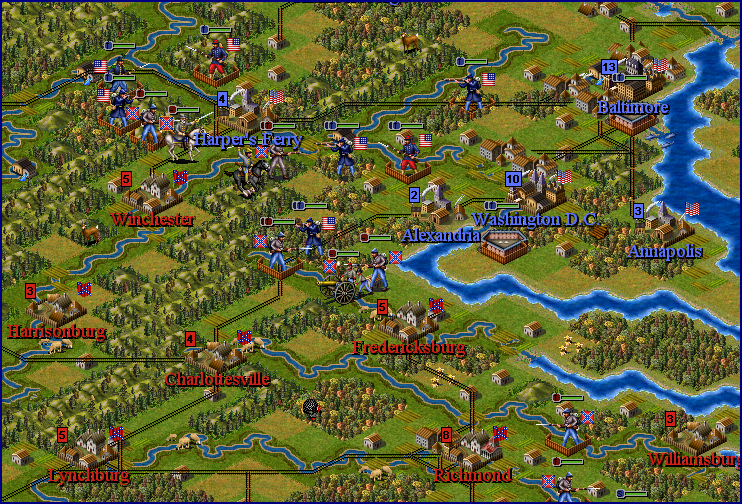