Germanicus on the Rhine

It has been five years since Arminius betrayed Varus, slaughtered three of our legions in the Teutoburg Forest, and stole our eagles. Since then, the Germans have grown complacent. They question our might and consider us vanquished.

The campaigning season is nearly over and winter's frost will arrive at any moment. No German thinks of war tonight. Instead, they can be heard drunkenly celebrating their pagan gods, convinced of their invulnerability.

In a few hours, they will be fast asleep in a drunken stupor... The perfect time to strike.

Lead your legions in a surprise strike across the Rhine and take vengeance for our lost legions! Burn the Germans' villages, massacre their men, and enslave their children and womenfolk! Find our lost eagles and return them to the Empire! Bring the traitor Arminius back to Rome, dead, or alive! 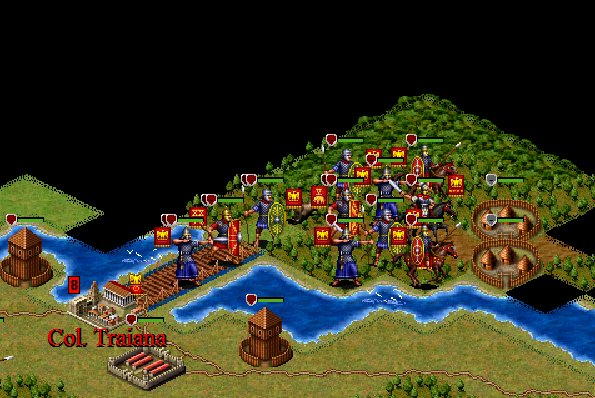 The Army of the Lower Rhine preparing a major punitive expedition!

The narrow paths are likely ambush spots, but often the only way through the forests!