The Age of War Redux

After dividing up the the rest of the world after 1850, the European states Turned once more to local rivalry. Since Waterloo, the wars had been short and relatively bloodless. The Crimean War, the Six Weeks War, and the Franco-Prussian War were bloody but brief. England, France, and Germany, the Industrial giants, built fleets of warships and vast armies. Italy, Russia, and Austria, facing social unrest, irredentism, and flagging claims to international prestige, all sought to somehow keep pace, thereby placing undue strain on their nascent industrial economies. Every summer new international crises appeared, and the inevitability of war became increasingly clear to all the powers. Imperialism had run its course, now the nations of Europe would become involved in the contest to determine not simply European hegemony, but world hegemony. The wars would come; the conclusion was inescapable. The only question was where would the powder keg explode and how long would the colossal contest last?

Changes to Version 2 of Age of War

1.) The tech paradigm is more than doubled to 150 and the turns are now 12/year (monthly). The problem that this fixes was the early arrival of most of the WWII military techs, easily acquired in the 20s. This increase in the tech paradigm might push the aquisition of these later techs to the 30s, a more historically accurate solution. The problem is that the lesser powers, Spain, Turkey, and Italy, all lose by this policy. Their efforts at technology gain are almost impossible.

2.) Naval units are faster. The truth is that, during a month, a modern ship could traverse the entire map. But because this is primarily a military simulation, the bombardment abilities of ships must taken into account, as well as supplying these ships with coal, an essential element that cannot be accounted for in Civ2.

3.) Only certain civs have, or ever will have, Guerilla Warfare tech. Historically, populations in German/Austro-Hungarian regions didn't exhibit much propensity to carry on partisan operations . . . except against the Germans. So this tech needed to be isolated. Spain and Turkey have it, and this seems right. Too many times during the modern era an occupied Spain has resisted bitterly, and of course the very word itself is derived from Spanish resistance movements. While it may seem questionable to give this tech to Turkey, the reality is that attempts by various aggressors to occupy parts of Post-Great War Turkey failed due to a widespread nationalist uprising. Although the conflict is little known today, the Turks fought pitched battles with the Greeks east of Smyrna, successfully demanded the withdrawl of Italian and French forces, and faced down the British contingents that were occupying Istanbul, forcing their departure as well. The Russians will receive it now along with the Communism tech. The British MIGHT receive it. The French will not, but French partisans can nevertheless appear in certain circumstances.

4.) New Graphix. Thank Gareth Burch for the most part, but there are also terrain, city, and icon graphix that I've borrowed from various sources.

6.) The Caucasus Petroleum wonder is now located in Stavropol. The Russian civ now has a considerable boost, when and if it can build the factories that can utilize it. The Germans now have a VERY good reason to move in that direction.

7.) The Impassable units simply don't work in a Flight scenario. When the AI acquires units that can attack air units, it attacks the impassable units. Because I found this AI stupidity unacceptable, mountain units were created and placed. They are on mountains, don't move, in fortresses, and have a 10 defense strength. They are all also located deep in the mountains. This is an unhappy solution to the problem, but the only one that worked. If the AI MUST hurl valuable units at brick walls, at least it'll appear that there is actual military conflict occurring, not planes diving into mountain peaks.

8.) Terrain has been changed in many places. Gibraltar is one place. There are others.

9.) A few techs have been renamed or eliminated, along with their units, and/or improvements. There are no more colonial units. These were really superfluous and added more for flavor than for effect. Ceremonial burial and temples are changed now to Occupation and Garrisons, respectively. Monotheism and Cathedrals are now Propaganda and Newspapers, respectively, and building of a Newspaper has a new sound to accompany it.

10.) Democracy has been made a no,no tech, and only the English have it. It cannot be traded.

11.) The Cosmic principles of both Fundamentalism/Fascism and Communism have been altered. Communism can now support more units and Fascism much less. Fascism's tech characteristics have been brought much closer to those of basic monarchy, but Fascism still brings in abudant cash, stifles dissent, and provides the free Fascist Elite units.

12.) Many, if not most original events were dropped. The new events file is more reactive, replying to the particular demands of an individual game.

13.) I have included another city.bmp file. When the Russian Revolution occurs, the text prompt will appear. Alter the names on the two files. All the 2nd file does is change the Russian city-flag to the Soviet red banner. This is important because barbarian units will appear that WILL appear to have the old Tsarist flag. These units will represent the counterrevolutionary forces that appeared, an oversight in the first game that needed to be addressed.

14.) All civs may now choose their starting research technology.

15.) The Arms Race wonder now has no preq., and may be built at start by anyone. The English have an advantage here, but then, historically, this is exactly what happened.

16.) Many cities have been manipulated so that they can't build ships or coastal batteries, and some have been manipulated so that the "founders" of the city aren't historically accurate. Russia didn't found Iasi, for example, and the "liberate" message will appear. This was done to reduce the chance that these selected cities will vanish when they're seized and only have a 1 population.

17.) Naval transports are now much more limited in carrying capacity. The Transport can now carry 1, the Ocean Liner 2.

18.) Amphibious Warfare is now a tech that provides the Amphibious Transport fleet unit. It's carrying capacity is much greater than normal transports (12), but it is very slow, moving only 2/turn, and is very vulnerable.

19.) The Railroad graphic has been changed so that it's more visible.

20.) The tech tree has been reworked.

21.) All surface naval units may shore bombard. Submarines have been added to the game w/the Submarine Warfare tech.

22.) American entry into the war on the side of the English can occur in 2 ways; if London is occupied by Germany, or by the 1/950 chance/turn for the Pacific War event. This event and/or the occupation of London by Germany will deliver several American units and a SuperFortress unit each turn to Great Britain. It will also set up the event that will compel Britain and Germany to war each turn, regardless of negotiations--the Unconditional Surrender.

24.) Pollution is now "wreckage" caused by social unrest. The graphic for this is the same graphic, the little fire, used for cities in unrest. The indicator graphic for pollution has been eliminated, however, which neccessitates IMMEDIATE cleanup for the player civ. 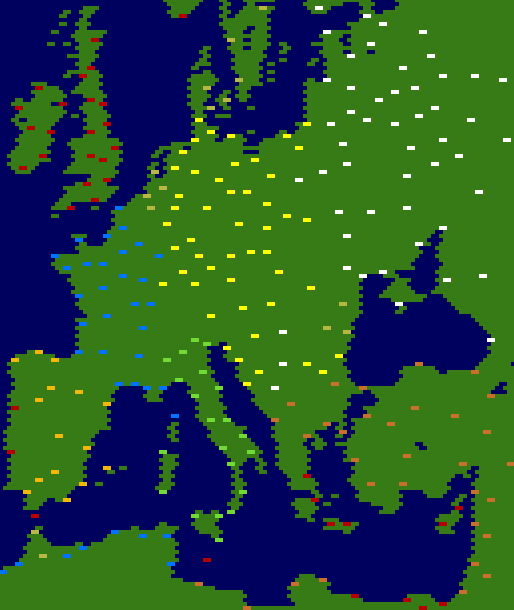 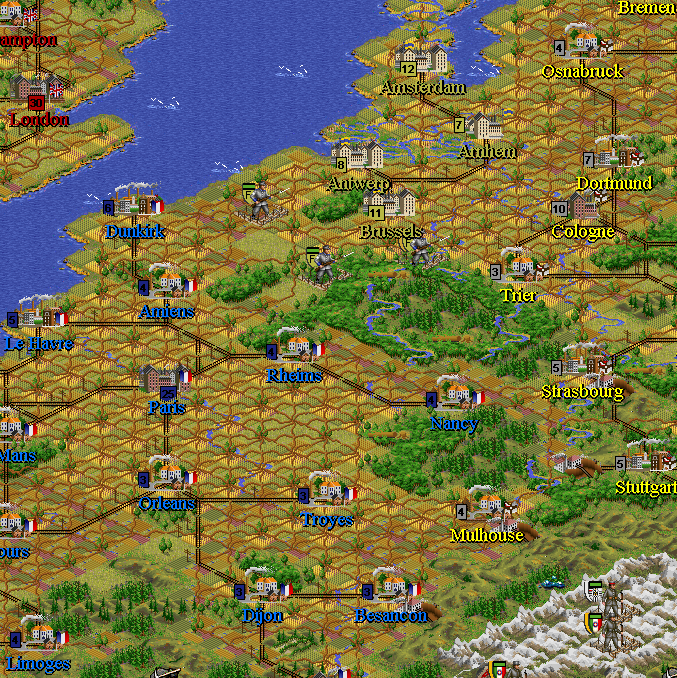