Overcoming some of the computer-controlled foibles involving correct unit selection for Civ2 scenarios.

Choosing the units for use in a scenario involves more than just selecting names and artwork. A designer must work hard to ensure that units specific to a particular nation cannot be used by others. Yet too much micromanagement will leave your favorite units unbuilt by computer-controlled nations. Even worse, there are several idiosyncrasies built into Civ2 that can frustrate your most careful plans. Some important ideas are discussed here.

To make sure that computer nations can build all the units you make available, look into the information window of a city controlled by the AI (by revealing the map, and clicking on any city). More often than not there will be units missing from the production list, despite the fact that the computer has the correct prerequisite technology, and the units are not obsolete. A number of factors can cause this, and designers must check each one.

The game will not let any nation (computer- or player-controlled) build any unit other than the one in the musketeer slot if it can be built or if a nation controls just one such unit! This affects all ground units wherever they reside in units.txt, and regardless of their scenario roles. It's best to use this slot for units only available to barbarians so the problem does not occur. Note: This is 'version dependent' - in that some versions of Civ2 will allow the 'earlier' slots to be active even though the musketeer slot is open to the building schedule. The bottom line - handle with care.

My advice when dealing with both slots (in order of preference) is:

A thornier problem arises when the computer selects units to be built. Many designers are unaware of this bug as it only affects computer-controlled nations. If you examine each nation by playing as a human player, all units will be displayed; only by revealing a computer-controlled city will you notice this problem.

The computer will not build a ground unit under any circumstances when another ground unit with the same role (the number just before the prerequisite advance in rules.txt) and movement allowance (1 or 2+) is available with better attack and defense statistics. The computer ignores cost, special abilities, hit points and firepower. Compare the following examples:

When tackling this problem, I typically divide ground units into five types:

Within each type I try to have a spectrum of statistics, and liberally use the pikemen flag (a defense bonus of 50% vs. attack units with a movement allowance over 1) to make further distinctions. Other designers avoid the problem by using the air superiority role (3). I have not done or tested this. In addition, having several units with equal stats but differing hit points, firepower, or special abilities will avoid the dilemma. The key to solving this problem lies in careful examination of cities controlled by the computer, noting which units appear in a city's production window.

Many other writers have outlined the alteration of technologies to make trees and advances unique to particular civilizations. I will not attempt to duplicate that work. One technique I do favor is a sort of reverse obsolescence: rather than assigning prerequisite advances to the units, I give all other countries the technology that make the unit obsolete.

The most noticeable benefit is that nations will still be able to trade if the obsolescent technology does not have its own prerequisites (no,no). There are three drawbacks: first, it normally requires more technology slots; second, a unit that is replaced by a more modern one with better statistics will still show up in city production screens; and third, sometimes the scenario editor built into Fantastic Worlds automatically changes technologies with no,no prerequisites into no,no technologies themselves.

Since not moving means not attacking, immobile units have an immediate and obvious disadvantage in Civilization. However, immobile units can play an important part in any scenario. Here are some useful roles in which many designers have used immobile units.

To prevent the conquest of tough cities, some designers place unit with high defense and hit point numbers (i.e. walls, policemen) which cannot move from the city which builds it. This provides extra security that a computer nation can't move away. Before using a unit in this way you should consider two things. First, such a unit can suppress unhappiness in Monarchy and Communist regimes if its attack value is higher than 0. These units still cannot attack (because their move is 0) but will postpone disorder. Secondly, you may want to consider not requiring any upkeep for units present at the start of the scenario, so they will not be a burden on the city. 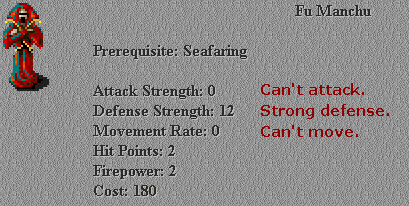 Immobile units that start the scenario outside of cities are what I call "fortress" units. When combined with airbases or fortified by settlers they provide strongpoints against invasion. When placing them, beware of shifting alliances that move a nation's units back to the nearest city. You may want to be sure that such units are not in another nation's city radius. Also, you should not have them tied to any city for support because they will burden cities and cause unhappiness in Democratic and Republic regimes.

A good way to prevent nations from visiting certain parts of the map is with the use of unattackable units. There are several concerns to address. For each unit you wish to use, make sure;

Take an air unit with a movement allowance of one and a range of one. Although it is not technically immobile, it cannot leave a city, airbase or carrier without running out of fuel -- but it can attack adjacent units. If it has the submarine flag it can then only attack adjacent ships, protecting against naval bombardment.

Certain slots in units.gif give special abilities to the units that occupy them. A trade unit with the double bonus of a freight must reside in the freight slot. The same rule applies for a unit to acquire the special abilities unique to spies (poisoning and nukes) and engineers (land transformation). And finally, when it becomes possible to build the units in the engineer and paratrooper spaces, messages from game.txt pop up telling a player how to take advantage of these abilities.