A scenario designer often wants to have different units and advances available to different tribes in their scenario. This guide is about making that happen and in general about editing the advances tree. If you haven't done so already, I suggest that you read our basic tutorial on editing rules.txt. Although we assume you have Fantastic Worlds or the Multiplayer Gold Edition installed, you will not be able to use the FW/MGE Advances Editor to achieve all of the effects you want. Notepad is your friend!

The main source of the problem is that you must use advances that DO NOT appear in the Civilopedia as the root of your tech tree. Fantastic Worlds is a little too clever, and will try to "fix" your tech tree if you do this. That's why you will need to do some editing using Notepad.

The key to making differences between your tribes is the use of no-no advances. If you look at the main Civilization II rules.txt file advances around plumbing you see:

The two "no" columns for Plumbing tell you that there are no advances leading to the research of Plumbing. Plastics, on the other hand, requires Refrigeration (Ref) and Space Flight (SFl) - I say it is "derived" from Refrigeration and Space Flight. In the real game, Plumbing doesn't appear in the Civilopedia and you can never research it. It isn't derived from ANY technologies. You can't even give it to a civilization by using the cheat menu. It's almost as if the advance doesn't exist.

There are a number of useful properties of no-no advances:

You CAN give a no-no advance to a civilization using an Event.

Important: Advances that are derived directly from a no-no advance appear in the Civilopedia normally. We will exploit this in order to create tech trees that are specific to a given civilization.

Fantastic Worlds and MGE are both too smart for their own good.

As an experiment, you might want to start a new game, save it as a scenario (say, test1) and change Pottery to a no-no advance called Once Removed. Now create an advance derived from Once Removed and nil called The Thing. Save as scenario, quit, and begin the scenario. Now check the advances. What has happened? It lists The Thing in the pedia, but you cannot research it -- even if you give the player the advance Once Removed. If you check the advances editor, you'll see it has modified The Thing to have prerequisites no, nil.

It seems this means it's impossible to make tech trees that are unique to one civilization!

The problem is that Fantastic Worlds has a habit of trimming items that are directly derived from no-no advances when created using the FW editor. Hmm… this sucks! You'll also find that these single-step no-no derivations cause FW to do lots of other strange things to your rules.txt file if you start editing things. Names and such will get screwed up. This is due to a major bug in FW.

OK, this time start a new game, save it as a scenario (test2). Change one of the advances to a no-no advance called Twice Removed. Now create an advance derived from it called Once Removed. Finally, create an advance derived from Once Removed called Kick Alien Butt. Copy the pedia.txt file from another scenario so you can see the results of your work. Quit and begin the scenario. Here is an example starting from Plumbing:

Now what's up? Twice Removed isn't in your pedia, but Once Removed is - although the prerequisites look funny. The important thing, though, is that Kick Alien Butt looks fine!

Now open up your rules.txt file with Notepad. Whoa! Surprise! Your new advances look fine -- they've not been altered! 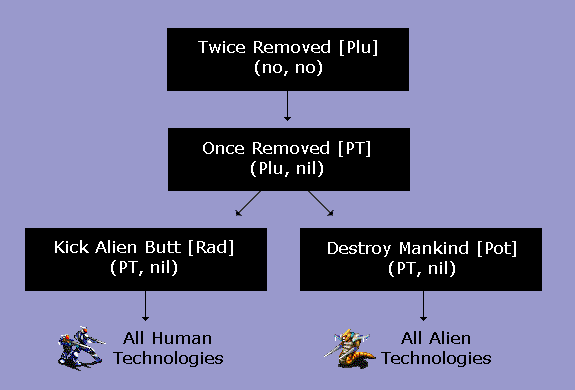 I have used this process to good effect in several scenarios, most notably Dungeon: Heroes of Beckhorn, where there are no less than six unique technology trees, each derived from Once Removed, which is in turn derived from Twice Removed. These later technologies can be researched, stolen and traded normally, but if only the aliens have Destroy Mankind, then the humans won't be able to research those advances.

At this point you will need to find ways to disable some of the ways of swiping these advances. I suggest turning off "tech from conquest" when you begin designing your scenario for real (you must tick this when you begin the game for the first time, as it is an option only then). You should also not use diplomats and should turn off negotiations using events. Start each civilization with its root technology and you are ready to go!

If you want, you can open up the Invasion Earth rules.txt file. You'll see that several advances have been converted just as I suggested. Just to prove that any four technologies will pretty much work, I changed Astronomy and Atomic Theory to Once Removed and Twice Removed, and made several technologies derived from them. For example, all of the government techs are derived from Once Removed so they will appear in the Pedia, but will not be possible to research. Likewise, I have included Kick Alien Butt (as Automobile) and Destroy Mankind (as Bronze Working). You might want to load up the scenario and check to see that the no-no advances in fact do not show up, while those derived from Once Removed show up in the Pedia and list of techs you can give to the player.

OK, we're now ready to make some unique units! The obvious way is to make your unit require an advance that other civilizations can't get (i.e., derived from one of your advances that comes off the Once Removed tree).

But what if you want the units to require the SAME technology to build for all civilizations, but still be available only to some civilizations? For example, you might want to have Knights and Samurai in the same game, both requiring Warlord Training as the needed technology, but have the Samurai allowed only to the Japanese tribe while Knights are available to the European tribes.

However, you can also see that they require different advances to become obsolete - in this case, Kick Alien Butt [Aut] (for Colony Pods) and Colonization [Exp] (for Engineers). Because Kick Alien Butt technology is ONLY available to the humans, they can never build Colony Pods -- although Colony Pods appear in the Civilopedia. Likewise, the Colonization advance is only going to be given to aliens so the aliens won't be able to build Engineers.

What this illustrates is that you can have two units that require the same technology to build, but that are civilization-specific. The way you do it is by having different technologies that make the units go obsolete. Usually, these special advances will be derived from Once Removed and will be given to the tribe from the start, as in the case of Kick Alien Butt.

So what if you want to make an improvement unique to a single civilization but that requires the same advance for both civilizations? We can't simply make it obsolete like we could with units. To accomplish this particular trick requires the use of events as well as technologies. Imagine we want two civilizations to both be able to research Monotheism, but we want our Islamic civilization to build Mosques and our two Christian civilizations to build Cathedrals. How can we do it?

The reason why you need one event for each civilization is that you will want this to be a JUSTONCE event; otherwise it will fire every turn and pop up whatever message you had.

Most of Part II has already been covered excellently in Leon Marrick's guide to advanced scenario design, but I will reprise it and give some examples from Invasion Earth. I will also include a few other considerations that have not been covered before.