A guide to designing advanced tech' trees, including side effects of various technologies, recursive trees, proper termination, and branch theory.

Now that we have covered the basics of tech tree design, it is worthwhile to consider all of the picky details that need to be taken care of when designing tech trees and all of the neat special effects you can achieve using advances. I am indebted to Leon Marrick for much of the material presented here, especially the list of special effects for various technologies.

Throughout I will illustrate with the Invasion Earth Mini-Scenario. You will want to be ready to open up the main files with Notepad and get into the nitty-gritty details -- for this part even more than the previous one.

The examples I have given so far assume that your tech trees diverge totally. That is, all of the technologies that are unique to a particular civilization are along a branch derived directly from Once Removed. For example, we assumed that all alien technologies are in a tree built on Destroy Mankind.

But what if you want many of your technologies to be shared by all civilizations? For example, you might want a scenario about France and England in the 19th century that involved most of the same technologies with just a few short branches where the tech trees diverge. You might want the French to have more opportunities to develop their army, for example, while the British have more nautical advances.

Perhaps the simplest case is where you have a short branch that you want only a few civilizations to have. In Invasion Earth, both humans and aliens can develop the Plasma Weapons and Energy Harness advances. However, we want the Terminator advance to require Plasma Weapons, but we don't want the humans to be able to research it!

So how to we restrict the Terminator advance, which is NOT in a separate tree for the aliens? By now you have probably guessed the solution, which I have sketched below. 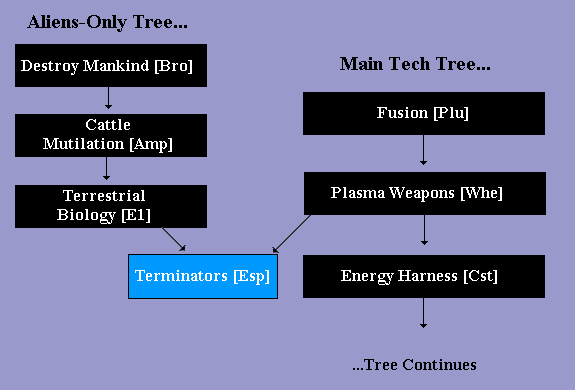 What I have done is simply to insert Terminators as depending on Plasma Weapons, but also make it depend on an advance that only the aliens can get. You could even use Destroy Mankind directly rather than tracing it through later technologies if you want.

Another possible problem would be dealing with two totally separate trees that should lead to the same advance at some point. For example, in Invasion Earth I wanted both the humans and the aliens to be able to get Guerilla Warfare eventually. The reason was that at some point the aliens should be able to convert people to their cause through bribery, mind control and alien cults. What I did was leave Guerilla Warfare in the human-only tree, but I included an event (see the Invasion Earth events.txt file) that gives Guerilla Warfare to the aliens when they learn the Sympathizers technology. Technology #34 is Guerilla Warfare (you can figure it out by counting down the list, or you can just use the Fantastic Worlds Events editor and create a GiveTechnology event using the name of the tech and it will convert it to the number for you). 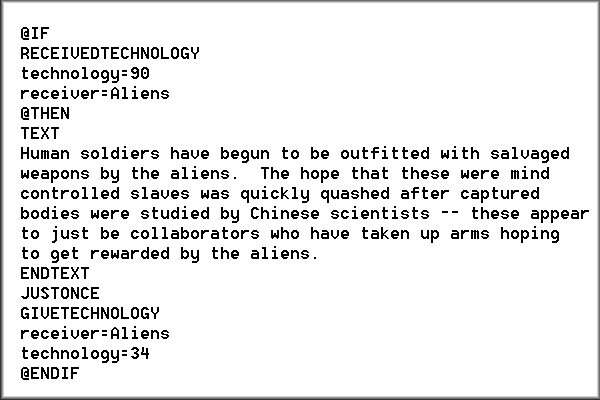 This trick was first used in the Master of Magic, Jr., scenario. A recursive tree is one that turns back on itself. It means that one civilization begins far down one of the branches of the technology tree, but not necessarily far down all of them. For example, in Master of Magic, you can eventually learn all of the types of magic, but to do so requires extensive research. However, each tribe starts with ONE of the branches of magic. This would be a recursive tree, because at some point you get the technology to move down other cultures' tech trees.

It should be obvious how to set such a thing up by now, but if not, look again at Fusion and Plasma Weapons [Plu and Whe, respectively]. The aliens begin with Fusion and Plasma Weapons already researched. However, if you check, Fusion requires Military Lasers [Hor] and Nuclear Subs [Pot] to research! Those are on the human-only tree. What I did was give the technology to the aliens, assuming that those earlier advances were too out of date for them to even care about. However, for the humans to get Fusion, they need to make their way up their own tech tree.

The technology tree should be possible to trace all the way to Future Tech or you may run out of advances to research (which creates some problems). However, if you have multiple branches that could be a problem. The solution is simply to use GiveTechnology to ensure that everyone can research future tech eventually.

In Invasion Earth, the humans can take the direct path to Future Tech, as it depends on Energy Harness [Cst] and Edge of Tomorrow [Chi]. The aliens, on the other hand, can't ever reach Edge of Tomorrow. So what I did was include a GiveTechnology event that gives them the Edge of Tomorrow advance when they discover Adv. Alien Tech [Che]. Viola! They can now get Future Technology.

Many technologies have game effects that are not obvious or not clearly documented, so you need to be careful about what advance you use for what purpose. I usually mark off a few of them with *'s right from the start to ensure that I don't mistakenly use one for one of my technologies by mistake. Here is a list of the special effects for various technologies, quoted directly from Leon Marrick's paper:

Notice that the Industrial cities and people appear only once you discover Industrialization, and Modern cities and people appear once you discover Electronics and Automobile. So, if you give players these technologies you can control what their cities and people look like. I did this with Invasion Earth. The humans have Automobile and Electronics (though under another name) and so their cities use the modern style and you see the modern human faces I put in to people.gif. The aliens don't have either of these techs or Industrialization, so they appear as aliens with alien cities. You may want to look at both of these art files to see what I did.

People / citizen images may also be amended by providing 'Philosophy' and 'Invention' (or the advances in these two slots), in order to change from the Ancient to the Renaissance styles [Ed: Thanks to Ithil for highlighting this].

This part of the tutorial covers tricks with the tech tree and has some thoughts on tech trees that are partially interconnected. It finishes the main part of the Advanced Tech Tree Tutorial. I may have a Part III at some point covering branchiness theory, but it will likely appear both here and on the upcoming Call to Power SLeague area as it applies generally to any Civ-like game that uses technology trees.

If you have any questions or find errors in this guide, please email me. This is a long guide and there are bound to be typos and small glitches that need to be fixed.

Thanks and keep on Civin'!